Why Do Social Workers Get Sued? 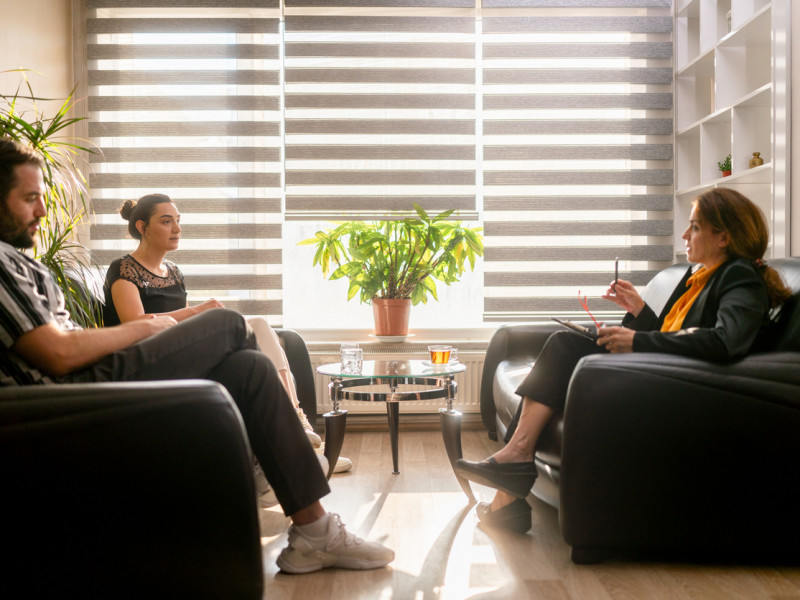 Life as a social worker can be deeply fulfilling, but this career path holds its fair share of challenges. Clients come from a wide range of circumstances and often present difficult or heartbreaking cases. Still, social workers persevere because they believe they can make a difference.

Unfortunately, the sensitive nature of social work leaves professionals vulnerable to a range of potential claims. Even the most competent, trusted individuals can be accused of negligence. Regardless of whether these allegations are proven, legal action taken against social workers can present significant challenges — both personally and financially.

In this article, we shed light on a common area of concern among current and aspiring social workers alike: the potential for lawsuits. We explain why social workers face legal risk and how claims can be avoided. You'll also come away understanding why liability insurance is so important for today's social workers.

How Often Are Social Workers Sued?

The frequency with which social workers are sued has grown dramatically over the past few decades; nowhere is this more evident than in data from the National Practitioner Data Bank, which demonstrate a steady (and marked) increase in the number of adverse action reports made against social workers since 1990. That year, only 2 such reports were made; compare that to 2019, which saw an unprecedented 991. The graph below summarizes the NPDB's data through 2020. 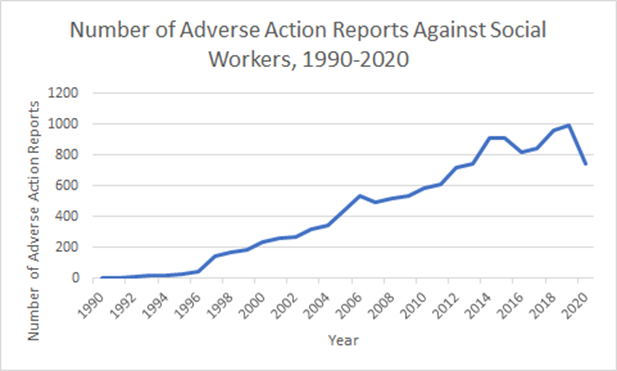 Frederic G. Reamer, professor at Rhode Island College’s School of Social Work, explains that a single allegation of misconduct can lead to many types of formal complaints. These could be filed with:

While the impact on the social worker largely depends on the type of complaint, potential consequences could range from reprimands to loss of licensure. Financial judgments are also possible if cases go to civil court. In all such complaints, social workers will inevitably also incur significant financial costs as they turn to lawyers for counsel and representation.

Why Are Social Workers Sued?

A variety of situations can lead to lawsuits against social workers. The guide Essential Skills of Social Work Practice explains that malpractice occurs "when a legal duty has been breached (e.g., confidentiality)." It may also take place when practitioners "fail to carry out their duty either through omission or commission of an improper act."

Examples of situations or allegations that may lead to malpractice claims include:

As we've mentioned, it's possible for the most respected social workers to be targeted by lawsuits, even when they believe they've abided by all the legal and ethical requirements of their profession. Given the harsh consequences that can result from such claims, it's important to consider what you can do to reduce your personal risk. The following proactive measures can be especially important.

Prevention begins with due diligence. This means studying the National Association of Social Workers (NASW) Code of Ethics and ensuring that you abide by the core values referenced in it. Although the NASW stresses that violations of its code do not "automatically imply legal liability or violation of the law," any lawsuit is likely to measure your alleged standard of care against the code's requirements. A successful defense will depend on proving that your care met these code standards. Furthermore, even if the alleged violation does not result in a court or administrative action, it is subject to peer reviews, a process that also requires a diligent defense.

In addition to studying the professional ethics code, stay current on all applicable local and state regulations. Like any heavily regulated industry, yours requires a thorough understanding of legal rules and guidelines affecting your job.

You should also think about utilizing comprehensive resources like the Association of Social Work Boards' (ASWB) Model Social Work Practice Act. This guide aims to establish the minimum standards of professional competence in social work. It also identifies options for addressing complaints and, when necessary, removing allegedly incompetent social workers from the field.

Another valuable risk - control measure is to maintain clinical records at a minimum in accordance with state and federal legislation. In the event of a lawsuit, such documentation could provide powerful evidence. Similarly, lack of consistent and thorough documentation could be viewed as a lack of diligence and could hamper your ability to defend your professional decisions.

In any event, retained clinical records can provide numerous benefits both for you and those you serve. For example, if clients are ever transferred to another practitioner, the records you've kept will help ensure proper continuity of care while also helping them qualify for additional services.

No matter how careful you are, there is always the risk you will be sued for malpractice -- regardless of whether your work fell below the standard of care. And even if you successfully defend yourself against such a claim, the lawsuit itself will cost you time, money, and resources. Therein lies arguably the biggest benefit of malpractice insurance (also known as professional liability insurance). Coverage is essential even when you feel confident that you’re following all legal and ethical requirements for your social work services. What's more, many states and employers mandate that you carry professional liability coverage. Professional liability insurance provides coverage for a range of expenses that you might face in the event of legal action. These could include not only legal fees and settlement payments, but also travel expenses and lost wages.

"Virtually all social workers should consider coverage, including those who might not think they need it," Reamer says. "Strange things happen. Lightning can strike." Professional liability insurance provides the peace of mind you need, and can protect your hard - earned financial assets.

While most social workers enjoy some degree of protection through their employers, many invest in supplemental coverage. In the event of a claim, this supplemental insurance gives them their own pool of money to pay for representation of their choosing, experts, and any settlement fees. Basically it provides greater control over their defense.

Depending on the policy, supplemental coverage could deliver additional liability limits. It also provides coverage for work performed outside of the professional's primary place of employment, which is critical if you maintain an independent practice unaffiliated with your employer. Regardless of whether you find these concerns relevant, Reamer advises, "You should have your own coverage to make sure your individual interests are protected."

Additionally, even if you're not named in a legal dispute, personal liability coverage can provide valuable protection based on several other situations you might face as a social worker. For example, you could be subpoenaed as a witness to provide testimony in custody battles, criminal matters, or workers' compensation cases. You'll feel better prepared if individual insurance coverage allows you to secure legal assistance for these proceedings. Make sure to check your policy terms for these features, as not all policies cover these situations.

To illustrate the types of situations that might lead to legal disputes, we've highlighted a few examples of malpractice cases involving social workers.

Javeed I. Syed, LMSW, appealed an order from the Board of Social Work Disciplinary Subcommittee (DSC). During the initial case, the DSC concluded that Syed failed to demonstrate due care when he decided not to intervene when he witnessed a mental health technician (MHT) assaulting a patient.

When asked why he didn't stop the MHT or push the panic button, Syed claimed he "did not know how to react because he was in shock and that he was afraid that the MHT would come after him." Furthermore, Syed explained that, because the patient did not appear to be upset, he felt it was best to avoid antagonizing the MHT in the interest of keeping the patient safe.

While an administrative law judge had previously concluded that Syed's actions met the standard of care, the DSC rejected the ALJ's conclusion, alleging that Syed "did not appear to intervene or attempt to protect the patient" and therefore violated the applicable standard of care. Syed appealed this decision, claiming that the evidence did not support the DSC's conclusion. Syed based his appeal on expert witness testimony about the importance of verbal de-escalation, which Syed believed he had pursued to a sufficient degree.

Nonetheless, the Michigan Court of Appeals disagreed with Syed’s arguments and affirmed the DSC’s finding of malpractice.

In this Illinois wrongful death lawsuit, Lori Ortberg and the Rockford Memorial Hospital were found liable for almost $1.5 million in damages resulting from Ortberg’s alleged negligence in treating her patient, Keith Stanphill. The claim alleged that Ortberg exhibited negligence when, after a suicide screening, she concluded that Stanphill did not pose an imminent risk of self - harm.

However, Ortberg’s notes after meeting Stanphill were that he denied having ideas of suicide or a plan. Her chart also indicated that he had lost weight and was taking an antidepressant.

Ortberg diagnosed Stanphill with adjustment disorder with depressed mood and referred him to a marriage counselor. She also followed up and made sure he’d made an appointment with the counselor. Stanphill died by suicide nine days later.

At trial, the jury found the defendants liable for negligence and awarded the Stanphill family $1.5 million in damages. For reasons not discussed here, however, the trial court ruled in favor of defendants, which prompted the plaintiffs to appeal. The appeals court reversed the trial court’s ruling, with instructions that the original jury verdict be followed.

Social work malpractice cases can get very complicated and very costly. Professionals named in such lawsuits risk significant financial consequences, even when favorable outcomes are eventually reached. With so much at stake, it is always a good idea to perform due diligence, maintain detailed clinical records, and secure added financial protection in the form of liability coverage. These key steps can reduce the risk of malpractice allegations or, in the worst - case scenario, provide much - needed protection for social workers.

Learn what malpractice insurance would cost your practice

How Much Do Social Workers Make?