The Best (& Worst) States for Registered Nurses in 2020

Here’s some great news: according to U.S. News & World Reports’ Best Jobs of 2020 rankings, registered nurses cracked the list of the top 10 best healthcare careers in the U.S.! That said, job opportunities and earning potential will differ from state to state, so the real question is: where will you have the BEST chances for professional — and personal — satisfaction?

To help you answer this question, we identified four key factors that contribute to whether a state can be considered the “best” (or “worst”) to work as a nurse:

For each metric, we pulled the latest data from sources like the Bureau of Labor Statistics (BLS) and U.S. News & World Report. Then, we identified which states ranked the highest and lowest for nurses along all four categories. Here's what we discovered. 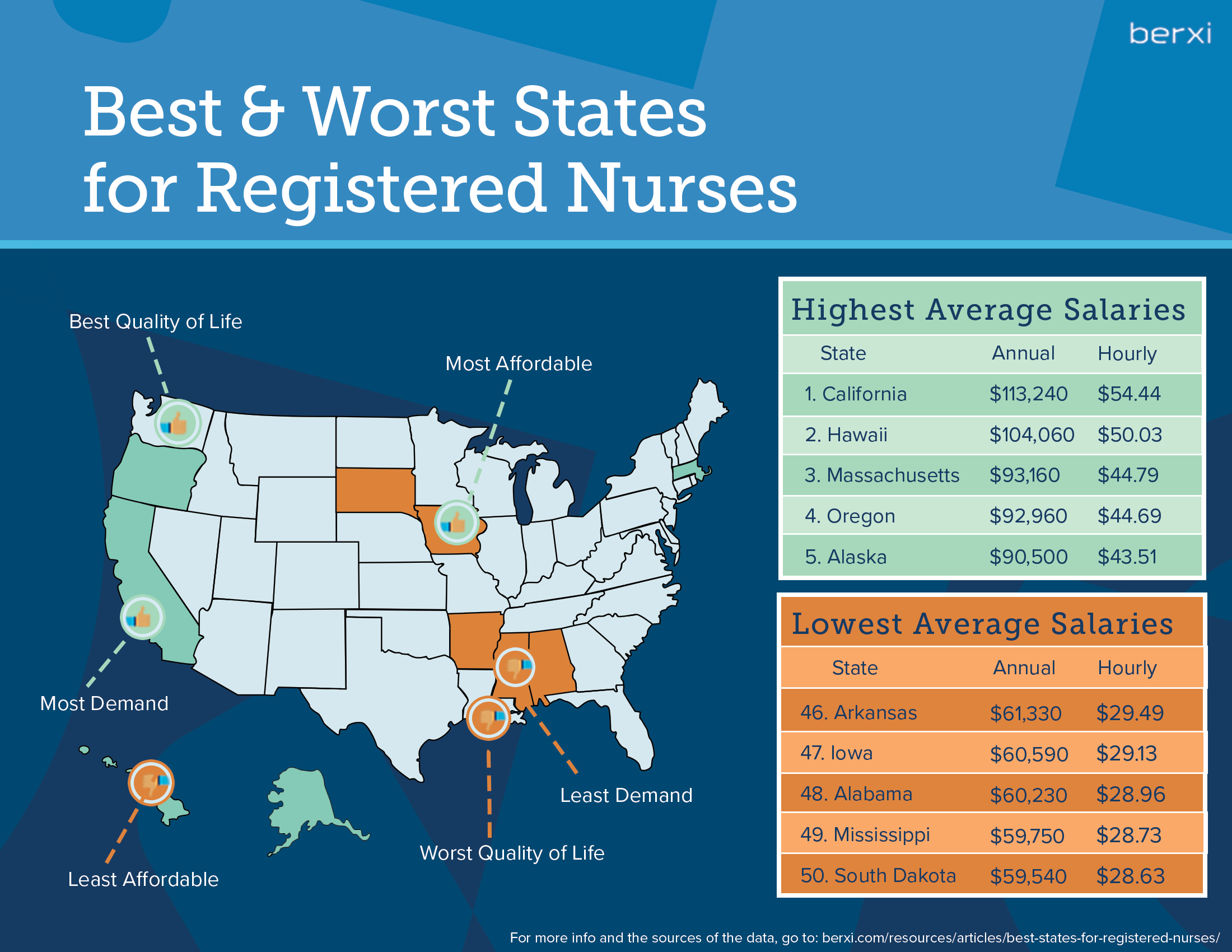 Want to dig a little deeper into the data? Below, you'll find tables for the top five and bottom five states for each metric. And, at the very bottom of this article, you'll also find the full datasets we pulled from.

First, we wanted to find out what your earning potential could be as a nurse working in each state. Below, we’ve shared the latest data from the Bureau of Labor Statistics' (BLS) Occupational Employment Statistics program to show you the five states where nurses earn the most money and the five where they earn the least.

Keep in mind that all BLS data reflects the employment and wage numbers for nurses as of May 2019. We'll update these tables when they release their 2020 data in May 2021. If you'd like to see the full data set for all 50 states, we've provided it at the bottom of this article.

The 5 Highest-Paying States for Nurses


The 5 Lowest-Paying States for Nurses

The Best & Worst States for Nurses: Affordability/Cost of Living

When considering your earning potential in different states, one important factor to keep in mind is your cost of living. (In other words, the amount of money you'll need to put towards basic living and housing expenses.)

To help you get a more realistic picture of your earning potential, we turned to U.S. News & World Report's Best States of 2019 Rankings and focused on one particular metric: affordability. To determine each state's "affordability score," U.S. News analysts gave each state scores for two sub-metrics: cost of living and housing affordability. Then, each state received an overall affordability ranking on a scale of 1 to 50, with 1 being the most affordable and 50 being the least. Below, we've shared the five states that ranked highest and lowest in this category, as well as their scores for the two metrics so you can see how they contributed to each state's rank.

Keep in mind that U.S. News & World Report last updated their rankings in May 2019. We'll update the tables below when they release their new data.

The 5 Most Affordable States for Nurses


The 5 Least Affordable States for Nurses

When determining whether a state is the "best" or "worst" to work as a nurse, one key factor to consider is not only how much demand there currently is for your particular skillset, but also how much there will be in the future. Right now, you could be living in a state where nurses are getting hired like crazy, but will that be the case five, even 10 years from now? Whether you choose to stay put or move to a new state, you should at least consider what your job prospects will be, both in the short and long term.

The Best & Worst States for Nurses: Quality of Life

Finally, we focused our attention on the states that could provide RNs with the best overall quality of life.

For this metric, we turned again to U.S. News's 2019 Best States Rankings and focused on their overall Best States list. For this ranking, analysts gave each state scores for 71 different sub-metrics, all of which were grouped into the following eight categories:

The analysts took those sub-metric scores and ranked the states for each of the eight key metrics above. Finally, the analysts gave each state an overall rank, based on their performance across those eight categories. States that made the top of the list do the best job of promoting their residents’ well-being, whereas those who made the bottom of the list do the worst job.

Remember: This data was last updated in May 2019. We'll update the tables below when U.S. News releases their new rankings.

The 5 Best States for Nurses' Quality of Life


The 5 Worst States for Nurses' Quality of Life

As promised, here are the full datasets we used to identify the best and worst states for RNs in terms of projected demand/job growth, salary, affordability, and quality of life. If your state didn't make any of the lists above, take a look at the following tables to see what's in store for RNs in your neck of the woods.

Source: Bureau of Labor Statistics (May 2019)

is a contributing writer through CopyPress, a content creation company that works with Berxi to provide the best content around. Lauren is a happily married freelance writer living on Australia's Central Coast. When she's not playing with words, she loves rollerskating, spending time in the kitchen, watching indie films, and cuddling her Devon Rex cat, Gizmo.

Professional Nursing Organizations 101: What to Consider Before You Join

5-Minute Summary: The ANA Code of Ethics for Nurses