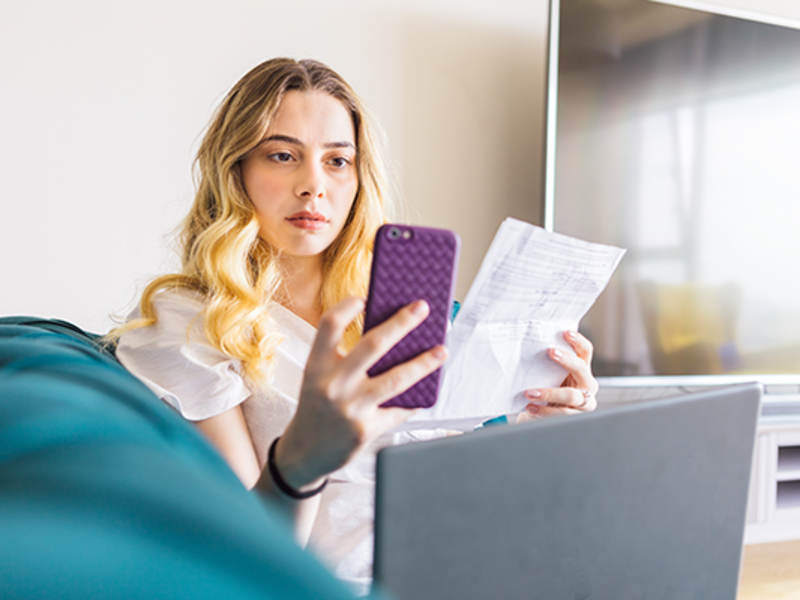 Names have been changed to protect the privacy of the NPs we interviewed for this story.

When “Alexandra,”° a Colorado-based travel nurse, thinks about her student loan debt, it stresses her out. She has a master’s degree from a prestigious private university, and although she’s always taken her education seriously, she says she’s now paying for it — literally.

“It’s stressful if I really stop and think about how much money per month I will have to devote to loans and for such a long time,” Alexandra says. “But I don’t get too caught up in that because it seems like a normal part of life, unfortunately.”

Student debt is an issue that affects almost every kind of profession there is. In 2018, CNBC reported that 70 percent of all college students graduate with a significant amount of student loans. And just how much money is “significant”? As it turns out, the average student loan balance was $37,172 -- which, as CNBC noted, was a $20,000 increase from just 14 years ago.

Nurses and APRNs are no exception. According to a 2017 survey published by the American Association of Colleges of Nursing, 69 percent of graduate nursing students said that they had to take out federal student loans to help pay for their education. On top of that, the median amount of student loan debt ranged from $40,000 to $54,999.

That’s a whole lot of debt to have hanging over your head as you graduate and enter the workforce, especially given the fact that your loans won’t be the only expense you’ll have to manage. For this reason, many nurses and APRNs are trying to find ways to pay off their loans early. Though it can be tricky to do, there are many nurses who’ve found creative and practical ways to accomplish this goal. We talked to two real NPs to find out how they’re managing their student loan debt.

Alexandra works as a travel NP, which means she works in a specific place on a short-term contract, usually about 13 weeks. This gig is ideal for her because, as someone who loves to travel, it means Alexandra gets the chance to live in new cities on a regular basis. Unfortunately, though, it also means there might be times when she’s transitioning from one job to another and has to live off her savings.

“I definitely have dipped into savings between contracts,” she says. “I’m usually able to save decently during contracts but then dip into savings for loan payments and to fund trips, weddings I’m in, etc. I usually live at home with my parents between [jobs], so I don't have to pay rent, which helps.”

Because she’s moving from city to city, Alexandra’s housing costs are offset by the stipends she receives from her employers. These stipends aren’t a fixed amount and thus can vary, sometimes significantly, depending on each city’s cost of living. Right now, she’s living in Aurora, a suburb of Denver, which has quickly become a hotbed for Millennials. Because it’s so popular, rents are rising fast and short-term leases are hard to come by.

“The original housing plan I had lined up was $1,350 per month, which was the cheapest, most decent short-term housing option I could find, but that fell through,” she says. “I found myself in a real pickle. Someone at the hospital connected me with a lady renting out a bedroom in her house. So it’s a lot cheaper than any of the other options I’d found.”

Alexandra is still working to pay off the loans from her undergraduate and graduate programs. She went to a private university in St. Louis and borrowed money to pay for her tuition and living expenses.

“I recently changed my loan repayment plan from standard, where I would have had to pay something around $1,200 per month, to an income-driven plan, where I pay $938 per month,” she says. “If I understand it correctly, my private loans have a 10-year life, but I’ve been paying on them off and on (depending on student status) for a few years. My federal loans are paid over 20 years with the current repayment plan, but I plan on adjusting that over the next few years to pay it off sooner.”

Having so much in debt not only affects her present, but it also determines her future. Right now, she rents an apartment and drives an old car. Without the debt, she says, “I would probably buy a new car and a house a lot sooner.”

For anyone considering nursing, Alexandra says that there are ways to reduce your student loan burden. You can get your RN license after only two years of school and start working immediately. The hospital where you work will often pay for you to get your bachelor’s and master’s degrees.

“I know a lot of nurses that did that and are debt-free,” she says.

Alexandra is currently well-paid for her position, but she has concerns about the future.

“I’m able to pay it now without any problem because I’m getting paid pretty well with my current contract,” she says. “But I’m concerned about when it’s over, if I have a period of unemployment, or if I get a public health job (which is what my master’s is in), because I’ll likely get paid a lot less than I am now.”

A Financial Expert Weighs In

After reviewing Alexandra’s expenses, Robert Farrington, Millennial Money Expert® and founder of The College Investor, agrees with her decision to switch to an income-driven repayment plan if the standard plan’s payments were too stressful. Otherwise, she would not be debt-free for about 20 years.

“It's always best to choose a repayment plan that's affordable versus worrying about the interest and not making ends meet,” Farrington says.

He says Alexandra could also find other ways to balance saving for the future and repaying her loans.

“She could contribute to a health savings account, open a solo 401(k) or SEP IRA,” he says. “Her contributions to these accounts lower her annual gross income (AGI), which in turn lowers her discretionary income [which is how the income-based loan payments are based]. Not only can she save more for the future, but lower her student loan payment in the process.”

After graduating from college in 2011, Rebecca quickly paid off her $10,000 in school loans by working three 12-hour shifts at a hospital on top of working three days in a clinic, all over the course of six months.

Four years later, she found herself craving a career that would offer her more money and increased responsibility. So she decided to go to grad school to earn a Master of Science in Nursing, and she was able to use her hospital’s tuition reimbursement program to cover the entire cost of her education. They only had two requirements for Rebecca to meet: 1) She had to continue to work at the hospital while she earned her degree, and 2) She’d have to stay there for two years after graduation.

However, after she graduated, the hospital didn’t have any jobs available for FNPs. She tried to find a position for a few months, but there was nothing available. So she quit.

A few of her friends said that because there weren’t any NP jobs available for them, they weren’t billed for leaving the company before their contract ended. That didn’t happen for Rebecca, however. After she left the hospital, she got a letter saying that she owed them $9,000. The good news is that there’s no interest to pay, which is a better deal than any federal or private loan she could’ve found.

“It’s been relatively easy,” she says. “I wish I didn’t owe it back to the corporation, but at the same time, I’m thankful.”

Her loan payments are relatively affordable, at $100 a month. In 2018, she made $140,000 from working a full-time job, as well as overtime and weekend hours. That adds up to about 60 hours a week. Rebecca also has $6,000 in 0 percent interest on furniture for her new house. On top of all that, Rebecca lives in Austin, where housing costs are exploding. She owns a condo and rents out two bedrooms, which helps pad her income.

Her only financial regret? She wishes she had taken out fewer loans for her undergrad and had chosen a more affordable school.

“Where you go doesn’t really make a difference in nursing, unless you’re going to pursue academia,” she says. “As far as clinical jobs, they care about your skill, not the name of your university."

Rebecca says other nurses struggling with student loans should look into working weekend and night shifts, which allow them to earn significantly more than they would if they only worked day shifts. Yes, it requires working more than the standard 40 hours and giving up precious weekend time, but it can go a long way toward reducing your debt payoff time.

A Financial Expert Weighs In

Farrington says that Rebecca’s doing a good job keeping her income high and her student loan payments low. But he thinks she should repay the student loan ASAP instead of making the minimum payments.

“She also has other payments, which she needs to eliminate: [For example], the mattress payment and furniture payments,” he says. “She needs to buy things in full, and only buy it if she can afford it.”

He likes to see that she’s maxing out her retirement funds. By doing so, she’s helping herself build financial independence and, possibly, retire early.

“She has the ability to stash it away and save on her salary,” he says.

If you’re a nurse or APRN struggling with managing your student loan debt, you’re clearly not alone. Hopefully, Rebecca’s and Alexandra’s stories — paired with Farrington’s financial guidance — have gotten your wheels turning when it comes to putting together a plan for managing your own student loans. If you need more help, consider talking to friends who’ve used (free) debt management tools or consultants to see what worked for them. You should also aim to make your own planning spreadsheet.

Just know that the more you work, the more you’re growing as a professional. You’re setting yourself up for all kinds of great career advancement opportunities, as well as great retirement options. Slowly but surely, your debt will go away, especially if you can stop accruing more of it!

How we use your email address
Zina Kumok

is a contributing writer for Berxi.

How to Become a Nurse Entrepreneur

Nurses, Side Jobs, & the Risks to Consider When Working 12-Hour Days