These Are the Best (& Worst) States for Nurse Practitioners in 2020

Just in time for the new year, we've updated our list of the best states for NPs. Find out what's in store for your state this year. 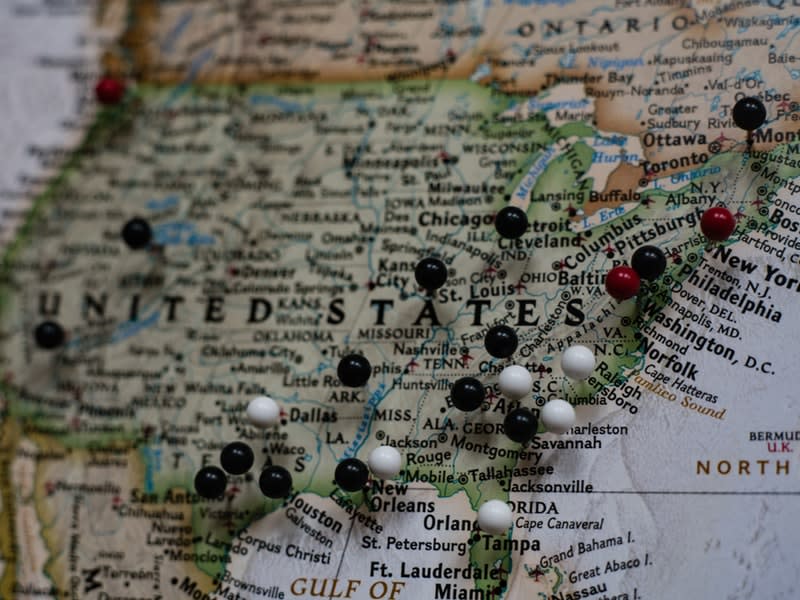 Some people follow their job, moving wherever their position takes them. Others know exactly where they want to live and then find a job that fits their needs. If you’re a nurse practitioner, it doesn’t matter which of these camps you fall into. The latest employment data shows that not only are your skills in high demand across the country, but also that employers are willing to pay very good money to have you work for them.

But don't just take our word for it. According to U.S. News & World Report's Best Jobs of 2020 rankings, NPs came in at #4 for the Best Healthcare Jobs category and #5 overall. (That's certainly nothing to sneeze at!) These high scores were due in large part to two key metrics: Job growth and earning potential. Between 2018 and 2028, the Bureau of Labor Statistics (BLS) projects that demand for NPs will grow by about 28.2 percent -- which translates into about 53,300 new job openings. In terms of earning potential, the average annual salary of an NP was $110,030 in 2018 — pretty impressive, especially when you consider that the average annual salary for U.S. workers was $51,960.

Now, the only question you need to answer is: Do you stay where you are, or do you move someplace else?

To help you figure this out, we provided rankings for each state along four key metrics. Below, you'll find out which states made it into the top five — and bottom five — for nurse practitioners in terms of:

And since practice authority plays a significant role in the kind of work an NP can do, we've also provided each state's scope of practice laws. Together, all these pieces of information can help give you a better idea of what states would be most ideal for you to live and work, based on your priorities and preferences.

The States With the Highest & Lowest Nurse Practitioner Salaries

Below, we’ve provided data from the BLS’ Occupational Employment Statistics (OES) program to show you the five states that offer the highest salaries for NPs, as well as the five that offer the lowest. Keep in mind that all BLS data reflects the employment and wage numbers for NPs as of May 2018.

The 5 States With the Highest Nurse Practitioner Salaries

Money is a great motivator. If you’re looking to earn a salary on the higher end of the pay scale, these are the states where you can make the most money as an NP.


The 5 States With the Lowest Nurse Practitioner Salaries

Here are the five states where NPs would make the least amount of money. As we mentioned before, the average annual salary for U.S. workers was $51,960 in 2018. So while these states did make the bottom of the list, these numbers are still very impressive.

The Most & Least Affordable States for Nurse Practitioners

Of course, no conversation around salary can be complete without also taking into account the cost of living for a given area. While having raw salary data can be helpful to give you a general idea of your earning potential, you'll get a much more realistic picture of your actual income when you understand just how much of it will be going toward living and housing expenses. For example, if you have a high-paying job in a state that tends to have a very high cost of living, then you would expect to see most (if not all) of your paycheck going toward your living expenses. But, if you had an average salary in a state with a low cost of living, you’d be more likely to have some money left over to spend however you wanted.

To help you get a better picture of your earning potential in different states, we turned to U.S. News's 2019 Affordability Rankings, which was part of their larger Overall Best States of 2019 ranking (more on this later). To determine how affordable each state was, U.S. News gave them scores on two metrics: Cost of living and housing affordability. Based on those scores, each state then received an overall ranking on a scale of 1 to 50, with 1 being the most affordable and 50 being the least affordable.

The 5 Most Affordable States for Nurse Practitioners

Here are the five states that are most affordable to live in. We've also included their scores for the individual metrics to give you more context.

Here are the five states that are the least affordable to live in.

The States With the Most & Least Demand for Nurse Practitioners

Logic follows that the more job openings there are, the greater the need there is for a specific profession. This is particularly true for nurse practitioners who (as we explained above) should expect to see the number of available jobs increase by about 36.1 percent between now and 2026. (This should translate to about 56,100 new jobs opening up during that time.)

The only problem is that this significant job growth won’t be spread equally across the U.S. Naturally, some states will see higher rates of job growth than others. Below, we’ve shared occupational projection numbers from Projections Central to show you the five states that are predicted to have the most job openings for NPs between 2016 and 2026, and the five that are predicted to have the least.

These are the five states that are projected to have the most NP jobs open up each year between now and 2026, on average. (It’s worth noting that these states also happen to make the list for the top 10 most populated states in 2019.) We’ve also provided the percentage of job growth each state can expect to see by 2026.

These are the five states that are projected to have the least amount of jobs open up each year between now and 2026, on average. (Here, it makes sense that some of the least-populous states would have fewer jobs available than those with larger populations.)

You’ll notice that there are some two-way ties in the number of job openings. Within those tied pairs, we ranked them based on who had the higher job growth percentage.

For this metric, we turned to U.S. News’ 2019 Best States Rankings, which considered a whole host of natural and social environment factors on a state-by-state basis. To determine each state's rank, they first provided them with performance scores for each of the following eight metrics:

The scores were on a scale of 1 to 50, with 1 being the best and 50 best the worst. They then used those scores to provide an overall ranking for each state. (You can read more about their methodology here.)

It’s interesting to note that the top five states are all northern, mostly suburban or rural states. Meanwhile, the states with the worst quality of life had much more metropolitan cities and larger populations.


The 5 Worst States for Overall Quality of Life

Practice authority is the amount of restriction and oversight an NP needs to practice in any given state — and each state’s laws and regulations will differ. The American Association of Nurse Practitioners (AANP) categorizes state practice environments into three groups:

Currently, most U.S. states give NPs full practice authority, but there are still a considerable number that don’t. Here’s how it breaks down:

Figuring Out Which State Is Best for You

When you’re trying to figure out which states could best meet your needs, think about what matters most to you: Is it job satisfaction? Is it your salary? Or is it your quality of life and happiness?

But don’t forget that everything comes with trade-offs, too. Take California, for example: That state came in at #1 for highest NP salaries, #19 for quality of life, and #2 for most job opportunities. However, it’s a restricted practice authority state, which means that you might not be able to perform every element of your job with the autonomy you want. On top of that, it came in at #49 for affordability, which means a significant amount of your paycheck would be going toward your living and housing expenses.

Meanwhile, more rural states like New Hampshire and Vermont could present better options for NPs. For example, New Hampshire offers full practice authority, was #2 for quality of life, and mean annual pay for NPs is $109,460. In Vermont, NPs can enjoy full practice authority and a high quality of life (it ranked at #5 overall). On top of that, they can earn an average annual salary of $106,00 there. However, Vermont ranked in third-to-last place when it comes to the number of NP jobs that will open up each year between now and 2026.

At the end of the day, it’s up to you to decide what’s most important to you at this point in your career. Make sure to identify all the categories that define “success” for you, then focus on figuring out which states can provide you with everything you’re looking for to live your best life possible.

Lauren Garcia is a contributing writer for Berxi. She's a freelance writer and editor from Orlando, Florida, and a 10-year news veteran. When Lauren's not busy with the written word, she's making magic in the kitchen or chasing her toddler around Disney World.