Nurse vs. Nurse Practitioner: What’s the Right Move for Your Career? 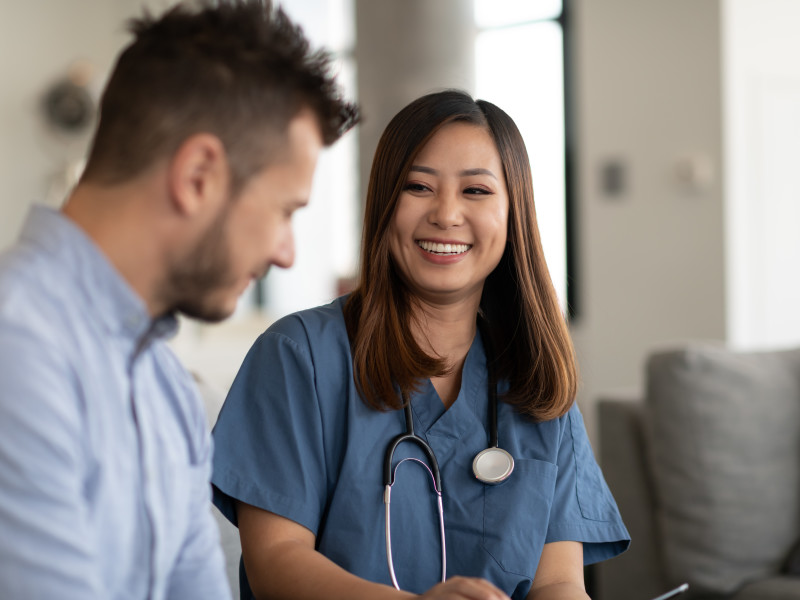 Are you trying to decide between a nursing career and advancing up the ladder as a nurse practitioner (NP)? If so, you aren’t alone. Many nursing students, licensed practical or vocational nurses (LPNs/LVNs), and registered nurses (RNs) consider whether becoming a NP is the right move for them.

Both nurses and NPs are valuable and necessary members of a healthcare team, and demand is high for all types of nursing positions. However, the differences between the roles may make one or the other a better fit for you.

Nurse vs. NP: What’s the Difference?

The primary differences between a nurse and an NP involve education and job responsibilities. An NP earns an advanced, graduate - level degree, while a nurse requires an associate’s or bachelor’s degree before obtaining a license and practicing. There are also some LPN - NP bridge programs that allow an LPN to get a bachelor’s degree in nursing (BSN) and go directly into an NP program.

An NP’s job responsibilities also differ from a nurse’s in that an NP can diagnose and treat patients, prescribe medications, and, in many states, act as an independent practitioner without supervision from a physician.

Other differences are worth considering as well. In this guide, we take a closer look at each role, including these factors:

All healthcare workers invest a significant amount of time and energy into meeting educational requirements, becoming licensed, and keeping up with continuing education. Becoming an LPN takes the least amount of time, RNs are usually the next step up, and NPs go through the most schooling.

LPNs need a diploma from a practical nursing program, which takes about a year to complete and combines coursework and clinical experiences. After that, students take the National Council Licensing Examination for Practical Nurses (NCLEX-PN). After obtaining their licenses, LPNs in most states must meet continuing education requirements.

RNs complete either a BSN or a two - year associate’s degree in nursing (ADN). These two degree pathways differ in terms of educational approach, leadership training, and clinical focus, but both programs adequately prepare students to pass the National Council Licensure Examination for Registered Nurses (NCLEX-RN). After successfully graduating, passing the NCLEX, and obtaining their licenses, RNs in most states must also log continuing education hours and renew their nursing licenses every two years.

The path to becoming an NP takes longer than becoming an LPN or RN. NPs start by getting a BSN and taking the NCLEX. They get their RN license and typically work in the field to gain experience before enrolling in a master’s degree to become an NP.

The NP program is a graduate - level program that typically takes two to three years. The final step before practicing is passing the National NP Certification Board Exam and obtaining a state NP license. Continuing education requirements for NPs vary by state.

LPNs, RNs, and NPs all need clinical training to become licensed. This training is included as part of their nursing education programs. The number of hours varies based on the length of the educational program. LPNs require the least amount of education and training, sometimes as little as one year, while NPs require years of clinical training, along with a master’s degree.

Every state has its own requirements for how many hours of clinical training and what classes are mandatory for LPNs, but in general, becoming an LPN takes about one year of classes and training. One example of an LPN program requires a total of 46 credits to complete, and two of its courses focus on clinical training. You can expect two clinical focuses: adult and pediatric health.

Some states, such as Oklahoma, also grant equivalency LPN degrees. That means that even if you did not complete an official LPN program, if you can prove that you have at least some of the necessary classes, along with equivalent clinical experience, you can become an LPN.

The required number of clinical hours for RNs varies based on the state, educational institution, and/or type of degree program. Training may combine virtual - based learning, simulation lab clinicals, and in - person clinical experiences. For a full list of clinical hour requirements by state, check out the National Council of State Boards of Nursing (NCSBN) list.

According to the National Task Force on Quality Nurse Practitioner Education, all NP program students are required to log a minimum of 500 direct - care supervised hours in the clinical setting before graduation.
Where an NP’s clinical training occurs depends on the program and the speciality being pursued. For instance, a family NP (FNP) needs clinical hours in a family practice clinic, while a women’s health NP (WHNP) or neonatal NP requires clinical hours in that speciality. Some NP programs allow students to arrange their own clinical training, while others require students to go through clinical placements with the school.

LPNs and RNs have similar duties and responsibilities that involve hands - on care, such as taking care of a patient’s wounds or helping the patient bathe and dress. The primary difference between an LPN and RN is that, in some states, LPNs cannot administer certain medications, such as those using an IV push. RNs may also have expanded job duties that include floor management.

NPs, on the other hand, have a wide range of duties that include everything from bedside care to specialty care to private practice.

NP Duties & Responsibilities
As primary and specialty care providers, NPs have a different set of responsibilities to manage a patient’s care:

Practice Authority
Nurses and NPs have practice authority requirements that vary by state. Nurses always carry out care that is prescribed by a physician or an NP, while in almost all states, NPs can act as primary or specialty care providers.

LPN Practice Authority
LPNs are always supervised by a physician and can’t prescribe medication. In some states and facilities, they also can’t administer certain medications, such as those using an IV push.

RN Practice Authority
RNs cannot prescribe medication. They work to carry out a treatment plan for patients that is prescribed by an NP or a physician.

In states with full practice authority, NPs are not required to be supervised by a doctor to diagnose or treat patients, so they can act as independent care providers. NPs in full authority states can also open and own their own independent practices. These 25 jurisdictions are:

Eighteen jurisdictions give NPs reduced practice authority, which limits some of their independent practice abilities. In these states and territories, an NP must have a legal agreement with another healthcare provider. Additionally, there may be some limits on what specific treatments they can provide.

The jurisdictions with reduced practice authority are:

Finally, 12 states give NPs restricted practice authority, mandating that they must be supervised by a physician throughout their careers. These states are:

Where Do LPNs Tend to Work?
LPNs can work in:

Where Do RNs Tend to Work?
RNs can work in a wide variety of environments, including:

Where Do NPs Tend to Work?
NPs often work in:

Salary
On average, NPs make the highest salary out of these three professions, with RNs coming in second and LPNs third.

What Is a Typical LPN Salary?
According to the May 2020 report from the Bureau of Labor Statistics (BLS), LPNs make an average of $24.08 per hour and $50,090 per year. The BLS also reports on percentile wage estimates for LPNs. The top percentile reported for an LPN was $65,520 annually, while the lowest percentile reported was $35,570 annually. LPNs tend to make the most in education, earning $60,570 annually while employed for junior colleges. The next most lucrative positions are outpatient care centers, where they earn an average of $56,320, and working for insurance carriers, where they make $56,260 annually.

What is a Typical RN Salary?
The average hourly wage for an RN is $38.47, while the average yearly salary comes in at $80,010. The top percentile reported by the BLS for RNs was $116,230 annually, while the lowest percentile reported was $53,410 annually. RNs can make the most in nonclinical settings, such as business support services, where they can make six figures, followed by federal executive branch positions and pharmaceutical and medicine manufacturing. Clinically, they make the most in outpatient care centers ($89,300 annually) and specialty hospitals ($82,910 annually).

What is a Typical NP Salary?
On average, NPs make $55.05 per hour and $114,510 per year. According to the BLS’s percentile wage estimates, top - earning NPs earn $156,160 per year, while the lowest - earning NPs brought home $82,960 annually. How much you make as an NP depends on what geographical location you work in, what specialty you choose, and what type of facility you work for.

For example, according to the BLS, the highest - earning industry for NPs is in community, food, and relief services, where NPs earn an average of $143,480 annually. NPs also earn high annual wages when working within religious organizations at $131,710 annually, residential substance abuse and mental health facilities ($130,830 annually), and social advocacy organizations ($127,970 annually).

Outpatient centers are also lucrative for NPs, paying an average of $123,850 per year. The next most profitable places NPs can work are general and surgical hospitals ($118,210 per year) and specialty hospitals ($123,550 annually).

Job Outlook
If you’re aiming for one of these professions, you shouldn’t have trouble finding work: all three positions are growing, with tens of thousands of new job openings every year.
While your NCLEX is specific to the state where you met your nursing requirements, some states also have what’s called a compact license. This means there’s an agreement with other states to allow you to practice within a select list of states. (See the current list of compact nursing states).

States that don’t have a compact license will only register nurses within that state, so if you move or want to be a travel nurse, you’ll have to be sure your license is valid in that state too, or apply for a new license.

Nurse vs. NP: How to Choose the Right Path for Your Career

Whether you’re attending nursing school, studying for your licensing exam, or working in the field, you already understand how vital all nurses are, regardless of their role. But choosing the right type of nursing position for you means assessing factors like those discussed in this article.

If you’re already working as a nurse, you likely have the requirements and experience needed to enter a master’s degree program and become an NP. Working as an NP would allow you to work in other environments, make a higher salary, and potentially have full practice authority depending on your state. However, the decision to become an NP needs to be weighed against your future career goals, as well as the time and investment required to become an NP.

Choosing between becoming an NP or a nurse depends on many factors, including what your long - term career goals are, what short - term resources are available to you, and what responsibilities you have in your life right now.

However, the beauty of entering the nursing industry is that there is never an “end” to your career unless you choose it. Once you enter into nursing, whether that’s through an LPN, an ADN, or a BSN, you can always advance your education and build your career. Nursing holds limitless opportunities in both clinical and nonclinical care, so getting your start as a nurse will open up many doors for you.

How does this compare to a Physician Assistant? > > Read NP vs PA: What’s the Difference?

How we use your email address
Morgan Fitzroyce, RN, BSN

is a healthcare professional and a contributing writer for Berxi.

The Importance of Critical Thinking in Nursing

Do Nurse Practitioners Really Get Sued?