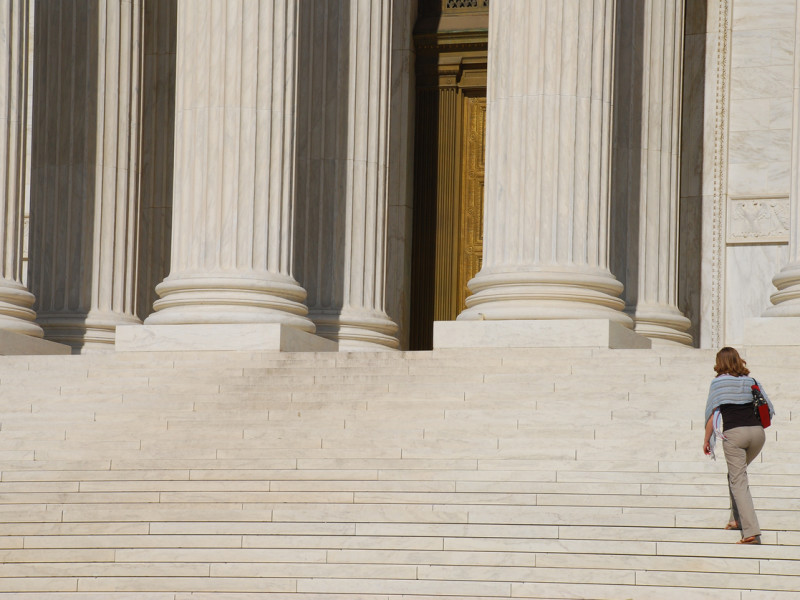 This story portrays the real-life experience of an anonymous nurse practitioner, interviewed by our writer, Robyn Correll.


She was a patient I saw in the emergency room - the typical kind of patient I see as a nurse practitioner: A 50-something-year-old woman with a history of high blood pressure.

She presented for weakness — no other complaints, just generally weak. She wasn’t ill during the hour and 15 minutes she was in my care. She could have gone home, or she could have been admitted. I decided to admit her anyway, just to be safe. I never saw her again.

A few months later, she died of a mycotic aneurysm — the result of endocarditis, a diagnosis she received six weeks after leaving my hospital.

I was sued not long after.

I received the initial letter of intent while at work. I was in scrubs and completely caught off guard. My medical director was there, too, and told me not to worry. It probably wouldn’t go anywhere, I was told, as my experience with the patient was so brief.

A couple weeks later, I got a certified letter from my employer’s medical malpractice insurance company. My patient’s family had opened a file and needed the medical records.

I honestly don’t think it hit me until I got an email from my lawyer introducing herself as the attorney that the insurance company had assigned to my case. I had to go to work that day, and I sat in the parking lot crying, wondering how I was going to go in there and objectively take care of patients.

My patient’s family’s legal team said it was my fault she died. They said that if I had ordered blood cultures in the emergency room, she would have been diagnosed with endocarditis sooner, preventing the mycotic aneurysm that killed her.

But she never had a fever. Her blood work was normal. She never had an elevated white blood cell count. There was no indication for blood cultures when I saw her.

Settle or Stick It Out?

I was among several healthcare providers included in the lawsuit but the only one from my practice. Contrary to what I’d been told in school, I wouldn’t be facing this with the physician I worked with.

But as the years went by, physicians and facilities named in the suit started dropping out, settling their cases one by one.

My malpractice insurance company didn’t want me to settle. They said I had no part in my patient’s death and that I should not be in the lawsuit, so I stuck it out. By the time the suit went to trial four years later, I was the only one left. Four years. Four years of sitting through depositions and mediation, listening while people told me over and over and over again how terrible I was at my job — only to have to go right back to work afterward.

I was advised not to talk about the lawsuit with anyone, except for my lawyer and my boss. I couldn’t talk about it with my coworkers, my family, or my friends. I felt isolated. I doubted how good I was at my job. I also started looking at every patient I came into contact with as a potential lawsuit. I had never looked at a patient like that before. Before, they were someone I needed to take care of. Now, in the back of my mind, I worried which of the people I cared for would sue me next.

All this internal turmoil started to stack up and weigh me down. I almost quit my job. After about 30 years as a nurse and then a nurse practitioner, I would walk away from work some days and think: This just isn't worth it. It isn't worth it.

The trial lasted two weeks. The lawyers told the jury I was incompetent, too stupid to know what I didn’t know — that I was a rebel trying to practice independently. They said that had I brought the physician I work with into the case, he would have seen how sick the patient was. He would have ordered the blood cultures.

Would he have? A half-dozen doctors or more saw the patient when she was in the hospital, and none of them ordered blood cultures. After the case was over and I was finally able to talk about it with the physician I worked with, he said he wouldn’t have ordered them either. The patient had no recent surgeries. She hadn't passed out. He assured me that any reasonably competent healthcare provider would have handled it the way I had.

During the trial, my insurance company brought in a specialty witness who explained that blood cultures wouldn’t have been the standard of care for the patient, and I hadn’t done anything wrong.

When it was all said and done, the jury only deliberated for a couple hours before coming back with their verdict: I was not liable.

After the judge banged the gavel, I just sat there in shock. I spent all those years focusing on this one thing, and just like that, it was over. Within five minutes, the courtroom had cleared out, and it was just me and my attorney.

I cried and cried. I left the courtroom crying.

My boss took me out to lunch after that. He sent out an email letting everyone in our practice know what happened. My phone blew up with emails and texts. “Oh my gosh, I’m so sorry.” “I couldn’t even imagine what you’ve been going through.” They hadn’t known what was happening. I couldn’t tell them. For four years, I worked alongside them battling the toughest challenge of my life. And they had no idea.

That night, we went out for drinks, and I let the relief wash over me. It was really over.

Now that the case is over, I’ve been able to reflect on the things I would have done differently. There’s not necessarily much I would’ve done different with the patient. I did the best I could with the information I had, and I know that. But if I were to go back, I would have had a little more faith in myself.

Even though I knew I didn’t do anything wrong, I didn't always believe in myself. There were times I lost faith in my knowledge and my experience as a healthcare provider. There were times when I wondered if I really should settle, if only to get it over with and move on.

I’m glad there were people who believed in me, even when I wasn’t so sure. The insurance company could have easily settled — they probably spent just as much to defend me as they would have in a payout — but they didn’t. They fought for me. And, in the end, we won.

How we use your email address
Robyn Correll, MPH

is a contributing writer for Berxi. She is a writer and public health professional with more than a decade of experience collaborating with healthcare providers to improve population health. Robyn's writing has appeared in national publications, including the Washington Post, Chicago Tribune, and Huffington Post.